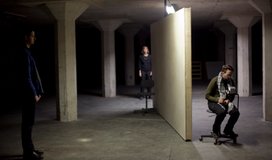 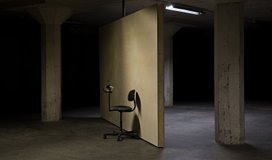 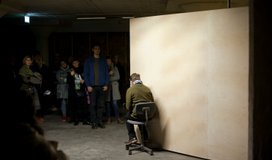 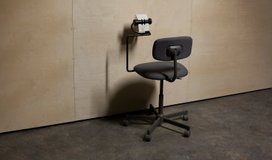 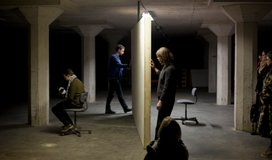 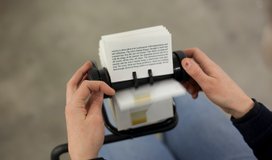 For the group exhibition ”Groundhog Day” Gideonsson Londré constructed a movable wall similar to the one they had in their studio during six months in 2015.

During that period they created a performative structure in relation to the wall, moving it every day to explore their studio activity. A text by philosoper Mio Lindman was produced as a documentation of a performance taking place in the artist’s studio in 2015 and consisted of 15 five-minute conversations. Lindman was invited to the performance to have discussions with the 15 participants about their relationship to different forms of activity in their everyday life.

The exhibition consisted of the movable wall and two office chairs. One chair carrying a rolodex with the script, previously written by Lindman. During the opening Gideonsson Londré and Lindman did a performance, where Lindman read the script from the rolodex. At  given instructions from the script Gideonsson Londré moved the wall to a new position, pushing Lindman to another spot. The audience was then also forced to move to folllow the reading.

After the performance the wall and the chairs were left in that position for the rest of the exhibition, with the script there to be read.