in collaboration with Nanna Nordström 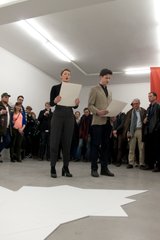 The collective process started with a text written by Nanna Nordström, which was rewritten by Gideonsson and Londré into two new texts based on rhythm and association.

This resulted in three versions of the text. The three texts were then composed into two versions, each corresponding to the other ones rhythm.

The texts were performed by GIDEONSSON/LONDRÉ as a simultaneous reading.

five hour for five days. The text was left unedited.

words standing in two separate rooms with a wall between them.

in collaboration with Nanna Nordström