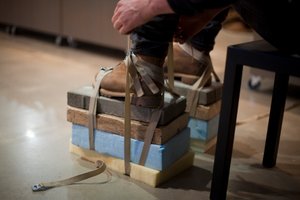 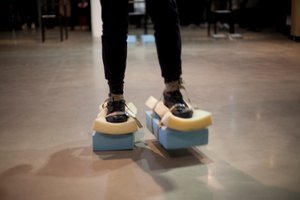 A rhythmic composition based on pulse and weight, between walk and march, between dog and wolf.

The soles, also used in the previous performance, were placed in pairs in front of eight chairs. Two pairs of each material (concrete, wood, Styrofoam and foam). Eight texts were also placed on the chairs. The texts were based on a form that was sent to the workers and the participants, where they described sensations they felt in different body parts in the previous performance.

GIDEONSSON/LONDRÉ performed these texts and at the same time they stomped their pulse. By each chair and new text, they strapped on another sole and walked to the next chair, in their pulse-rhythm, and sitting on the last chair they wore four soles each.